Lastnight I had a hankering for something treat-like and had the desire to experiment in the kitchen. My kitchen handiwork has been a bit sparse and patchy lately as I’ve been either too busy (or too out of town!) to get in there, or just plain un-inspired. After spending a week with Besty and making some interesting desserts, I decided I would see what I could come up with with all the fun and delicious things I had kicking around in my pantry!

So, here is what I pulled out as my inspiration: (in order of appearance, left to right) 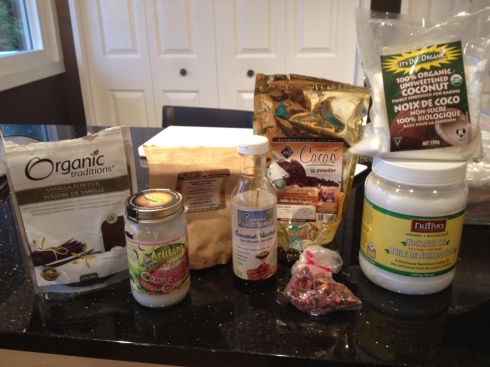 So, I had a rough idea in my head of what I was going to make…chocolate balls rolled in coconut and coconut balls with chocolate. Simple…

I started with the Artisana Coconut Butter (honestly, if you’ve never tried this, go get some…it’s like nothing else). I put some into a bowl and put the bowl over hot water (double boiler idea) to melt it into liquid consistency.

you'll want to bathe in this, trust me!

So, while that was melting, I was also melting the coconut oil (I use Nutiva, I like it, it’s organic and extra virgin, doesn’t go rancid and is a good price…I just got a huge container of it at Planet Organic on sale-I use it on my skin as well, so it’s worth it for me to buy the big one). I added melted coconut oil (used the same bowl over hot water method for the coconut oil) and agave syrup (I think I might have added some coconut nectar as well but I can’t remember-use whatever kind of sweetener YOU like) to the grated coconut and then added a bit of coconut butter to thicken it up a bit until I got the “stick-togetherness” that I was looking for. (Remember, it doesn’t have to be fully stuck together in a ball because it will harden up when you put it in the fridge…what gets warm and melts, must cool down and get hard…!!). THIS is what it looked like before I put it in the pan: 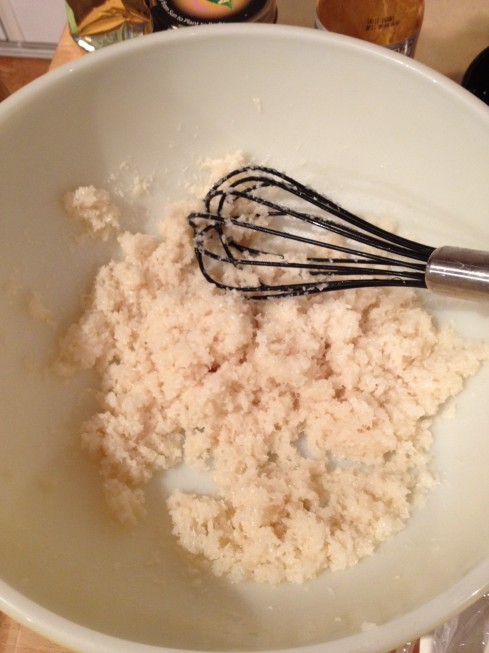 From there, I crushed the jungle peanuts in a bag and then added some celtic sea salt, maple syrup and mesquite powder and mixed it all up. I wanted a caramely salty crunchy nutty layer…Mesquite has an almost caramel type flavour to it and the rest of the flavours just worked together so well.

So, as you see, I pressed the coconut into a corning wear pan lined with plastic wrap (it’s way easier to get out of the pan if you line it). Then I made the chocolate and poured it over the top. The chocolate was melted coconut OIL with cacao powder, agave and a little vanilla powder. I used the Vitamix to get it nice a smooth. I had to til the pan from side to side once I had the chocolate over it so I could get the chocolate over the whole thing!

ready for the fridge!

The final product is tasty! I don’t know if I would do the jungle peanut layer the same next time…next time I might try pecans or brazils…both of those nuts are a bit heavier and might give a better flavour…alternatively, my peanuts could have been not the freshest and maybe I’d experiment with the ingredients a bit more….skip the mesquite, add salt and cayenne!! OK, so here is a pic of what it looked like…half eaten…

You’re on your own for measurements…you know me well enough by now…just add slowly slowly and eventually you’ll get it right! If you are organized, write down the measurements as you go so if you come up with a real winner, you’ll be able to recreate it another time!!

This dessert is indeed a dessert, but it’s got no refined sugars or fats. As far as sweet chocolatey coconutty things, this one definitely wins hands down!

ps…tomorrow I think I’ll tell you about my new love affair with chia….stay tuned!

Cupcakes are my new favourite experiment…

OK…I bought this e-book online from a Groupon type thing (ethicalDeal, I think)…it was two books by Natalia KW…you can find more info and the books to download here  ) because it was a raw book for raw cupcakes. I’ve had this coconut flour that I’ve been wanting to use but didn’t know what to do with it and along came this e-book with several recipes using coconut flour! Perfection.

I’ve made 3 different flavours of cupcakes. They all have the same basic base for the cupcake and icing but with different additions to change the flavour and theme. So far I’ve made basic vanilla cupcakes with vanilla icing, then I made mini strawberry cupcakes with honey ginger icing…and the most recent was the mini chocolate cupcakes with mint icing…super yum.

The texture of these cupcakes is so amazing…the coconut flour is so porous that it soaks up the liquid of the other ingredients so it’s dense enough to have body but not dry…and it’s not all full of nuts. I actually think that these are the *healthiest* raw dessert I’ve ever made. I’m so excited by these and so excited by the range of flavours that I can make. SO fun! 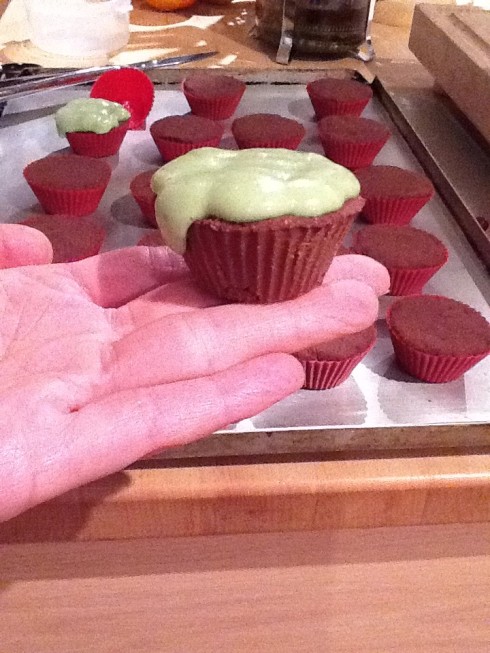 This past weekend I made some raw chocolate. It wasn’t my best attempt at raw chocolate, but I was being fairly laisse faire about the whole thing, and not really paying attention to measurements. Well, needless to say, it turned out OK, but not the best ever. So, I had all this chocolate left over (after dipping the raw macaroons, as well as making little heart shaped truffles)…so, I decided to make some kind of granola thing. My original thought was to make granola bars…but, again I was careless with measuring, so ended up with a mixture that wasn’t going to bind together, but rather stay crumbly. So, the granola was born.

Here is what went into it…you’ll just have to use your imagination and tastebuds with measurements, as, well, you know.

Pumpkin, Sunflower and Sesame seeds (all soaked and dehydrated)

Mix it all together, get it coated, then pop it in the dehydrator…guess you don’t have to dehydrate it again, but I think it’ll keep better/longer this way. Seriously, sooo yummy!

(sorry it’s kinda small, but hopefully you get the idea!)