Sun to Snow in 9 days flat

Good morning everyone! (I feel like it must at least be the late afternoon, alas it is still before noon here!).

I just got home this morning from a fabulous trip to Edmonton (with a quickie trip through Red Deer and then Calgary). I had the opportunity to work at 2 studios in Edmonton (BYEdmonton and BYWest Edmonton) as well as took class at the newly opened BYEast Edmonton and had a visit at BY St. Albert. Whew!!

I got to take several classes, teach several classes, work with competitors, give feedback to teachers, go for wonderful food, have great company, walk a bit, see some of the city, sit in the sun AND shiver in the snow…what a complete and well-rounded week! Honestly, I was surprised and impressed with Edmonton…the last time I was there (and really the only time I’ve been there-the only other time was when I was about 11 and there on an orchestra trip so all we did was play recitals and go to The Mall!), it was the SECOND COLDEST PLACE ON THE PLANET! (Siberia was the coldest!) So, needless to say, at minus -47 with the wind chill, I didn’t get up to much more than hiding out in the HOT yoga room!! But, this trip, the sun came out for the first half of the trip and I got to see more of the city…and see how it is quite the cute city in areas and can understand why people like it there!

After the week of teaching and practicing, I was whisked off to Red Deer to judge the Second Annual Alberta Regional Hatha Yoga Championships. I judged this event last year as well. The competition was held at the same venue in downtown Red Deer and was hosted by BYRed Deer (but put on really by all of the studios in Alberta-what a great community event!). We had 30 competitors (Youth, Women and Men) and probably about 200 spectators. The even was well organized and attended and was a huge success as far as I’m concerned. One of my goals this year was to really promote the yoga competition within Canada and help to up the ante, as it were, with Canadian yogis all across the country. My friend, Brad (BYMetrotown) and I have been judging buddies this year and have judged 7 of the 9 competitions I have judged this season, and will be together again in 2 weeks for the FIRST Manitoba Regional (April 29th in Winnipeg). Whew!! That’s a lot of judging this year, but it’s all coming to fruition and our hope for Canada to have more yogis in the competitions is working! (Today is the Eastern Canada competition and May 19th is the Western Canada competition).

So, after the competition, we headed down to Calgary and I flew home this morning from there. A fun filled week and now I am in my sweats and catching up on emails and blogging and…I will admit, watching a little tv ;). A travelling yogi’s gotta have some down time too!!

Me, Brad and some of the yogis from Red Deer at dinner post competition Saturday…”yogis eat too!” 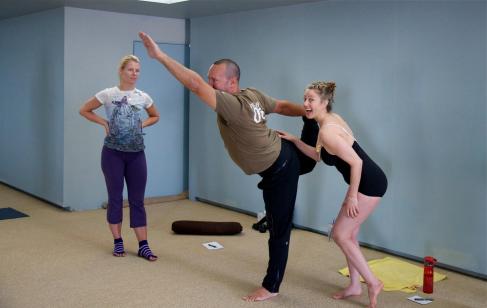 Me, Pernille and Michael at BYEdmonton at the Sunday teachers meeting…me, of course, always with my hand on someone’s derriere!

Pernnille, me, Nick and Marc at Noorish Restaurant in Edmonton-SUCH a great vegan and mostly raw restaurant with amazing food!

Hope to see you all soon, yogis.

Like Loading...
This entry was posted on Sunday, April 15th, 2012 at 12:08 pm and tagged with bikram, edmonton, noorish, raw food, yoga and posted in Uncategorized. You can follow any responses to this entry through the RSS 2.0 feed.
« Shout Out to Half Moon Pose
Bodacious Bodies in Beautiful Bandeaus…a follow up »